Merchants is a long-established fish and chip shop born in Bewdley, along side the River Severn. The local community hold the restaurant in high regard. For those from further afield, eating Merchants’ chips in Bewdley by the river has often become a tradition.

Merchants were planning to open a third shop in Halesowen after the success of their second shop in Stourbridge. Consequently, we were tasked with updating their entire restaurant branding to coincide with the opening of their new shop.

After our initial discovery meeting, the goals were clear. Firstly, We needed to develop a cohesive brand that pays homage to Merchants’ Bewdley roots. Secondly, customers needed to be able to make the connection between the flagship restaurant in Bewdley and the shops in nearby towns. The new branding had to show that Merchants was bringing the same, high quality, widely acclaimed fish and chips to other localities.

Once we had conducted research and presented stylescapes, we turned our attention to the logo. We took inspiration from two key points of research: fish and chips were popularised in the Victorian era; Bewdley bridge is one of the towns most memorable landmarks.

Victorian hand-painted signage inspired the typography. In addition, we incorporated the silhouette of Bewdley bridge to create a memorable logo with a traditional aesthetic. Furthermore, we produced alternative variations of the logo with varying levels of embellishment. As a result, the restaurant now has a logo system that is both flexible and cohesive. 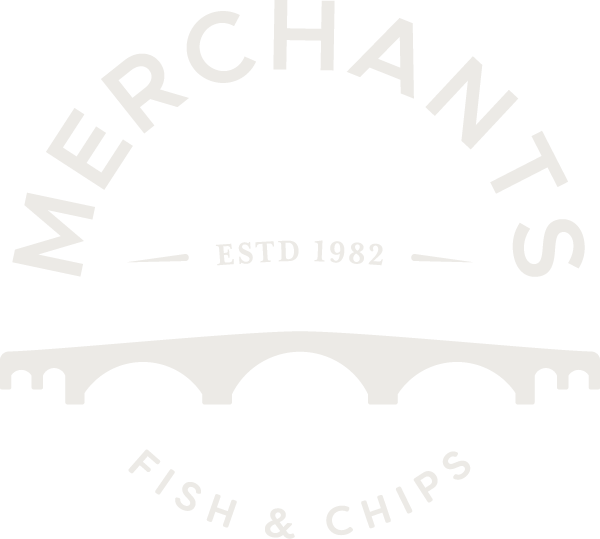 To celebrate Bewdley and everything that encompasses Merchants, we developed a host of brand elements to reinforce the memorability of the restaurant’s identity.

First, we established an illustration style and utilised it in the brand pattern. Moreover, we used the illustrations in conjunction with the typographic style we developed for the restaurant branding.

We even produced an illustrated map of Bewdley. The map’s style suited the traditional aesthetic that emerged throughout the branding process. And of course, the Merchants building sat at the heart of the entire illustration.

Merchants use social media as part of their marketing strategy and to communicate with customers online. Therefore, we created an array of social media templates to reflect the new brand across their social media channels. As a result, the restaurant’s social media output has been visually unified.

We use cookies on our website to give you the most relevant experience by remembering your preferences and repeat visits. By clicking “Accept”, you consent to the use of ALL the cookies. However you may visit Cookie Settings to provide a controlled consent.
Cookie settingsACCEPT
Manage consent

This website uses cookies to improve your experience while you navigate through the website. Out of these cookies, the cookies that are categorized as necessary are stored on your browser as they are essential for the working of basic functionalities of the website. We also use third-party cookies that help us analyze and understand how you use this website. These cookies will be stored in your browser only with your consent. You also have the option to opt-out of these cookies. But opting out of some of these cookies may have an effect on your browsing experience.
Necessary Always Enabled
Necessary cookies are absolutely essential for the website to function properly. These cookies ensure basic functionalities and security features of the website, anonymously.
Functional
Functional cookies help to perform certain functionalities like sharing the content of the website on social media platforms, collect feedbacks, and other third-party features.
Performance
Performance cookies are used to understand and analyze the key performance indexes of the website which helps in delivering a better user experience for the visitors.
Analytics
Analytical cookies are used to understand how visitors interact with the website. These cookies help provide information on metrics the number of visitors, bounce rate, traffic source, etc.
Advertisement
Advertisement cookies are used to provide visitors with relevant ads and marketing campaigns. These cookies track visitors across websites and collect information to provide customized ads.
Others
Other uncategorized cookies are those that are being analyzed and have not been classified into a category as yet.
Save & Accept
Powered by